For many years, I have sought that elusive moment, when something comes together in a frame that is both funny and serious at the same time. We should not well in other people’s misfortune, nor should we create so much laughter that the entire photograph becomes a joke. It is all about balance. The balance between the serious and the funny, in a well made photograph.

Elliott Erwitt, who in his long career has made many such photographs, and who himself will admit it is difficult, extremely difficult, said: ““Making people laugh is one of the highest achievements you can have. And when you can make them laugh and cry, alternately, like Chaplin does, now that’s the highest of all possible achievements. I don’t know that I aim for it, but I recognize it as the supreme goal.”

There are few, very few that on a consistent basis can make photographs that on the one hand make us stop and think, and on the other draws that elusive smile with the little wrinkles around the eyes. Many photographers have one, or maybe two photograph in their entire body of work that manage to hit both serious and funny at the same time in a fantastic composition, that is well lit, balanced and, as my wife would say; delicious.

Often the well made humorous photograph represents a mere split second, and there is little time to ensure that all the compositional elements are optimal and just the way you want them, have the right lighting and balance between light and shadow. More often than not, it is one of those photographs, were you see it, lift your camera, as you spin round and press the shutter, all the while praying that you have the settings right. It is only in the darkroom, or on the light table that you see what else is in the frame!

Occasionally, you get a subject that stays put long enough that you can actually take your time to move around, get the context and composition right, before you make the photograph. But, alas, this is very, very rare!

Elliott Erwitt and Martin Parr both have a terrific ability to see the quirky side of life, sometimes even creating the opportunity to make a great photograph. I am not much for staging, but I think some people are simply wired to see the bright side of life, the humour in it all! Bless them, because I enjoy their work tremendously and am always on the lookout for the elusive moment, when it all comes together.

If Elliott Erwitt was known for his serious political commentary (of which he has done lots), his documentation of major global events (he has done a lot of those too), and gorgeously composed landscapes, cityscapes, portraits, etc. (of which he has made many), would he be even more famous? Could he command higher prices for his work? I would venture that unfortunately, while humour in a photograph is perhaps the ultimate challenge, it is mostly dismissed as not serious.

Like Erwitt, Martin Parr is a great, great photographer, he has a fantastic eye for colour, composition and has the nerve to get in real close in an anonymous, flaneur kind of way, which is both revealing of the subject, yet like he was never there. His work truly captures a particular moment, an irony, a fraction of a second that can stand for all eternity, as a validation of just how terrible hair was in the 80s, and how class structures are alive and well, with big hats and chipped nail polish.

Will Martin Parr and Elliott Erwitt continue to be seen as some kind of side-show to the more serious main event? I don’t know, but it is cruel, and unfair. The work of the photographer, who manages to consistently find the fun in our daily lives, in an unencumbered way, must surely be cherished. 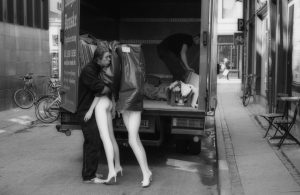 The dreamer. By Harbel

There will only ever be one Chaplin. 100 years on, we still view the old films with amazement, and a mixture of tears and laughter! Now, if only I could put that in a single frame….