In the late 1970s, when the birds flew the nest, the first few of my friends begged and borrowed and in some cases managed to get a pad of their own. Among the wooden crates that doubled as both tables and chairs, were thrown the first very adult wine and cheese parties. At a time when young people would find the oldest looking one, send him or her to the shop and pick up a bottle or two of inexpensive wine, the adventure began.

The short, dark, bulbous bottle, with the distinct shape, with the light pearling on the tongue, blush hue, and the semi-sweet palate was the favorite. Many bottles were consumed with much enthusiasm.

The Portuguese global success that for many decades now has been the choice beginner-wine has changed little. Made not far from Porto, the wine is as distinct as it is pink, and as unique as the pearly bubbles captured in the bottle, which for several generations has doubled as a candle stick, along side the straw wrapped bottle from Chianti.

In the mid-80s I was in Hong Kong in my first job, and Matheus Rose was one of the products that the old trading house that I worked for represented. It sold well in Asia, where wine was just starting, and a heavy drinker was one who consumed one or two glasses per week….  Not per meal. I reacquainted myself with the great looking label and unique bottle, and promised myself that one day I would go look at this building, which had such a profound influence on so many. 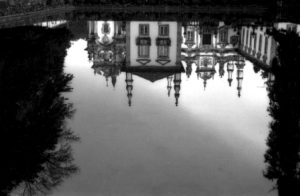 I finally got around to finding the rather elusive estate, particularly well hidden behind a big fence down a rather non-descript road. As I drove up, I saw the label. True in every detail. A particular Portuguese baroque style, two mirrored wings and a curious staircase leading to the front door. A door one cannot access directly, having to either make a sweep to the left, or the right up a rather modest set of steps. The building felt smaller than I expected.  The chateau is as you might expect big on first impression and much more modest inside. At least, I thought it showed a lot better at first sight when entering the property, than it did when you walked through some rather simple rooms.  I guess my many years of accumulated expectations fell a little flat.  But the first impression.  Splendid. 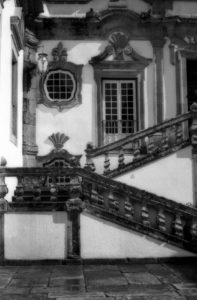 The setting and the gardens are quite wonderful, the building perfectly positioned among the formal and less formal elements and water features, but at the end of it all, it was that first look, so true to the label on the bottle that brought back the memories of candlelight, a baguette, a few cheeses and the obligatory glass of rose.

One more crossed off the list, leaving only a couple of hundred to go!