Another famous – and now infamous – photography competition presented by London’s National History Museum admits having awarded a prize to a photograph, which is more than likely fake. 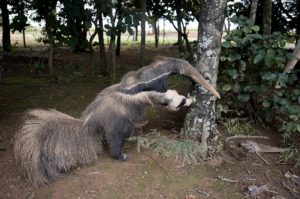 Thanks to an anonymous tip and a snapshot of a stuffed anteater – see above – we have the elements that led to the embarrassed National History Museum making a press statement, which reads, in part:  “After a careful and thorough investigation into the image ‘The Night Raider’, taken by Marcio Cabral, the Natural History Museum, owner of the Wildlife Photographer of the Year competition, has disqualified the photograph.” It goes on, “the investigation comprised of two mammals experts and a taxidermy specialist at the Museum, plus two external experts; a South American mammals expert and an expert anteater researcher.”

I see before me a sketch with Graham Chapman, John Cleese, Eric Idle, Terry Jones and Michael Palin as anteater and taxidermy experts.  A cartoon introduction of an anteater attacking a termite hill, courtesy of Terry Gilliam.  It would bring tears to the eye of any fan.  But I digress…

Back to the Press Statement:  “Evidence examined included high resolution photographs of a taxidermy anteater that is kept on open display in the educational collection at …. the Emas National Park – the large park where ‘The night raider’ was taken.” and continues: “….there are elements in overall posture, morphology, the position of raised tufts of fur and in the patterning on the neck and the top of the head that are too similar for the images to depict two different animals. The experts would have expected some variation between two individuals of the same species.”

When questioned Marcio Cabral, the ‘photographer’, apparently supplied RAW image files from ‘before’ and ‘after’ the winning shot, but none included the anteater.  He did however, provide a ‘witness’, who claims he saw the live anteater.

Friends, you just can’t make this stuff up!

Some advice to those that run competitions for photography (and not digital art or manipugraphs):  Demand the raw file, or the negative from those about to be declared winners. Compare the finished photograph to the raw file or negative.  Ensure the image is representative of what was before the photographer at the time the photograph was taken.  It is more work, but it saves the competition, catches out the cheats and bad apples, and makes the world a better place!

For someone like me who still shoots film, prints in a darkroom, and likes silver gelatin photographs, this is nothing new, just another nail.