He doesn’t look 80, more like 60! We shake hands. He lifts my old M6 from my chest to see if there is a screen on the back. There isn’t. A big smile spreads across his face and he gives me the thumbs up. It turns out that for many years, Giuseppe Leone has been shooting with the same analog Leica. He still does, still uses film and develops and prints his own work. My kind of photographer!

At Corso Vittorio Veneto 131 in Ragusa, Sicily, Guiseppe Leone keeps a studio with a window to the street showing classic black and white portraits – three framed and hanging in a row – facing the street. But if you walk up a couple of steps and open the door, you start to see that there is a lot more going on here than simply portraits on demand.

On the ground floor, you get a glimpse of the Sicily that we should all be eternally grateful that Mr. Leone has captured and preserved for over 60 years. If you are fortunate enough to be invited upstairs, you will enter a large space that with a few extra steps opens into the neighbouring building. Here you find lots of Mr. Leone’s photographs from across Sicily. All sizes, some mounted some not, some framed in simple black frames. All a little random, but the photographs are wonderful. This is also where he does his portrait commissions. On the third floor is the darkroom. Throughout, he has a few small glass front cabinets that hold old camera equipment. With pride he pulls out an old daguerreotype portrait to show us that he is part of a long line of photographers that have served humanity by making a permanent record of individuals, friends and family. 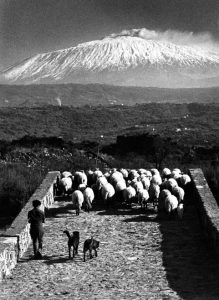 Mr. Leone shows us several photographs of the island that he very rarely leaves. There are photographs of the miles and miles of dry stone walls, a testament to the tough life working the fields. There is a record of great architecture influenced by all the invaders and occupiers of Sicily; Phoenicians, Greeks, Romans, Arabs, Normans, Spaniards, Piedmontese, to name a few. There is no place in Europe that I can think of, able to boast this kind of happy co-existence in architecture, landscapes and the genetic make-up of its people. It is with the people of Sicily that Mr. Leone is at his best. His people. The peasants going to church, going to the market, tending their sheep, cows and goats. There are celebrations on religious holidays. Guiseppe Leone captures the people of the island, in a manner the French would call ‘humaniste’. He particularly likes to photograph children at play, who are often improvising with the absolute minimum of toys, but making the most of a cardboard box and vivid imagination. There is a lot of Helen Levitt in these photographs.

Mr. Leone still runs a commercial photography studio for portraits, and has engaged widely in wedding photography along with other commissions to feed his personal pleasure of making great photographs of his island. The Sicily that he loves. 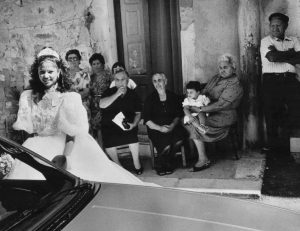 Looking at his photographs, it is evident that he has a wonderful feel for telling the story. As Helmut Newton would say: “making a movie in a single frame”. Even among his wedding photographs, which to shoot can be very repetitive and perhaps even boring to those that weren’t there, there are great examples of Mr. Leone’s keen eye: The bride is headed towards the getaway vehicle, multiple generations of family and friends are looking on. An old woman sits on a chair, her arms around a grandchild, or great-grandchild, with a priceless look of disapproval on her face. It seems that even when working, Giuseppe Leone cannot help himself. It is in his blood. 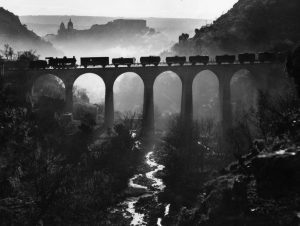 Mr. Leone is a skilled photographer. A large print at the top of the stairs Mr. Leone claims as his first. It is also the first image you see on his website, though the photograph is much more impressive in person. I was told he made this photograph in his mid-teens: A steam train with a string of tanker rail-cars is crossing a very tall arched bridge, below in the deep valley, a narrow silver steam snakes along a wide floodplain, the unmistakable silhouette of the big dome of the Duomo in old Ragusa is in the background. The air is misty, perhaps mixed with the smoke from the train giving the photograph a soft filtered light. The photograph is bold. Taken almost directly into the sun. Great skill, or unbelievably good luck, I have no idea, yet given all the great photographs that came after, there is no doubt that Giuseppe Leone has a wonderful ability to be present and anonymous among his people, the villages and towns, hills and valleys that make up the great island of Sicily. He understands Sicily. Maybe this is because Mr. Leone has always been here.

You can see more of Guiseppe Leone’s photographs on his website: http://www.giuseppeleone.it/.

Images are borrowed from the web and are by Giuseppe Leone and are for illustration purposes only, no rights owned or implied.