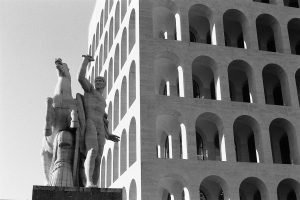 Rome never quite dealt with, or reconciled its attempts at a new empire. A number of fascist architectural buildings and monuments remain much as they were at the end of the ill-fated reign of Il Duce. Rome was declared an open city during the war, something I for one am very grateful for, but there are consequences, good and bad.

Being an open city, Rome has been left with a legacy of buildings and sculpture that are full of symbols, and history of a time that most would like to forget. Yet they remain. 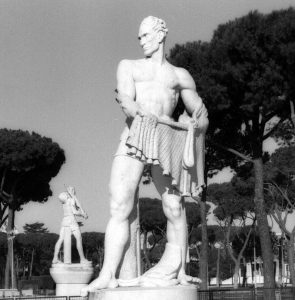 In Berlin and Munich most every sculpture and building of the so called 1000 year Reich, has either been destroyed by the bombs from above, or by dynamite at the end of the war. The few buildings that were allowed to remain, deemed to leave no risk of becoming some kind of cult shrine, were scrubbed clean, their original purpose soon forgotten. Few would know, or remember that the Ministry of Finance for the Republic of Germany in Berlin was once The Ministry of the Airforce, which once housed the obscenely large offices of the equally obscenely large Reichsmarschall Göring. 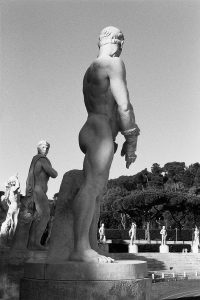 In Rome, on the other hand there are many examples of buildings and sculpture that were part of the new vision, or should I say the rear-view vision of Mussolini, his architects and his artisans. No real attempts have been made at scrubbing them clean of their Fascist history.

Two particular examples of this are the sports complex a little north of the city centre and the EUR. Both were intended to showcase the glory of the new empire, one as an Olympic venue and the other, as the heart of what should have been a world exposition in 1942, which of course never happened. 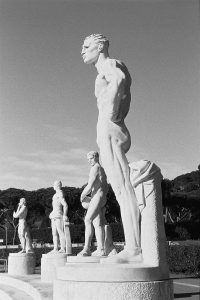 The photographs here are a few from my record of the macho Roman revival of the 1920s and 1930s. The sculptures are large, white and powerful. Almost exclusively male, and displaying their finest athletic prowess, but there is a sinister side to them. There is a mix of athleticism and military might in these sculptures. They cross over from athletics and sport to soldiers of war. The line between sport and war gone. 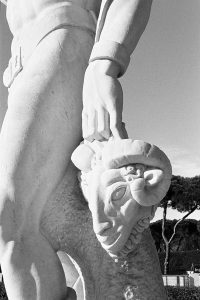 On some level, the sculptures are evocative of ancient Greece and Rome, but are Rationalist, in the same way that the contemporary architecture is. The delicate features of ancient Greece and Rome are replaced by angular, hard faces and ripped bodies. Where Greek sculptures and their Roman followers worked hard on the folds of fabric and the perfect locks of hair, the Fascist neo-realism is more in your face, usually nude, or almost nude, and designed to impress. This was supposed to be a new imperialism. These statues represent the macho, oversized superhuman soldiers, who failed so miserably, even against Abyssinians armed with shields and spears. 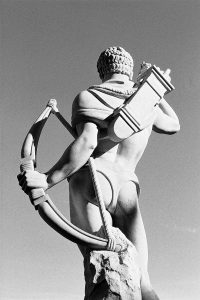 Hollow promises of greatness stand in Rome, 80 years after Mussolini found his end, killed by his own people and hung upside down by a rope, following his feeble attempt at disguise and flight. Like the coward he was.

What you see in these photographs is the result of my interpretation of a legacy that has gone from being something sinister to being used by everyday Italians trying to run faster, jump higher or throw further. Kids kick a ball around, and tennis players surrounded by marble seats, play in the heat of the afternoon. They play in the shade of the giants, that no longer serve any master. 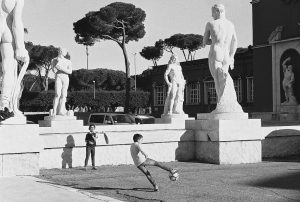 The sinister may be gone, but the story remains.