It is the end of January, and we have seen the dawn of a new era in the United States. There is a new term added to the lingua franca, the alternative fact. Perhaps the digitally modified photograph is an alternative fact?

I recently got an email message from a reputable interior design magazine that I subscribe to. Under the title: “20 reasons to travel to the Greek Islands”, the photo below was number 1 of 20. Someone was clearly not paying attention. The interior of the Pantheon in Rome and a beach somewhere, fused together to make it look like you can swim off the edge of an old Greek temple?

The coffered, domed ceiling and oculus of the Pantheon is quite particular and, if you have been there, you don’t forget. So, yes, I recognized the fraud and who really cares? But had I not, and was I looking forward to my next summer vacation, I could have spent hours searching high and low for the beach with the ruin. Who is responsible? The Magazine? the person who created the fraud? 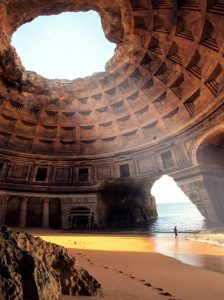 I grew up believing in what I saw on the printed page, or on TV. But, times change. I cannot imagine that I am the only one to become so jaded, that I immediately question every image I see. So, so sad!