I don’t know if Shōji Ueda and René Magritte ever met. Probably not, but there is an uncanny use of bowler hats and umbrellas in their photographs and paintings along with a surrealism that I think would have made them great friends.

I returned from the MEP in Paris yesterday. I visited the exhibition currently on, called Mémoire et lumière (Memory and Light), which is a collection of photography by various Japanese photographers dating from 1950 to 2000. There are only a handful of prints by Shōji Ueda, but they are entirely their own, when put next to the rest of the exhibition.

Ueda’s work is in some ways very minimalist. Some might say simple. He often used his family and friends as props/models and various simple tools such as hats, umbrellas, small frames, etc. to build his deceptively simple, yet very evocative photographic language. Using mostly a wide angle lens, good light, which allows for a lot of depth of field with good focus from front to back, he has created something that Salvador Dali would have applauded, as would Magritte and other surrealists, who were looking for a new language. A new way of seeing. 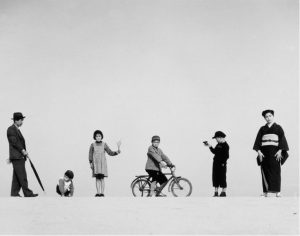 Ueda had the great fortune of living close to large sandy beaches, wide and mostly flat with very little vegetation, which is a superb backdrop for someone trying to make the viewer lose track of distance, horizon and scale.

It would be fairly easy to reproduce Ueda’s photographs, there is nothing technically difficult about the images, but when you factor in that they were made after the war in the late 1940s and 1950s, when Japan went through a very inward facing period, they stand out. A mixture of loss, guilt, profound sadness, and extreme poverty led to most photographers turning to dark, gritty scenes that very much reflected the post-war mood in Japan. Ueda went in a different direction.

Ueda chose to make photographs that were optimistic, often fun, clean, focused and minimalist. The beaches near his home led themselves particularly well to making horizons disappear and almost floating his models, family and friends on the sand, where on overcast days, it is close to impossible to figure out where the sand ends and the sky begins.

In one photograph, Ueda has placed a woman on the sand 30 or 40 meters from the photographer himself holding up a small, black rectangular frame and shooting though the frame, presumably using a cable-release, he has captured the woman far away in a way that is not much different than a formal Japanese studio photograph. With hand extended holding the frame and wearing a fancy scarf, the vision of the stylish artist, as the bohemian, is complete. 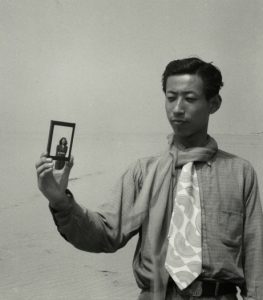 There is a language in these photographs that on the one hand gives rise to admiration of the innovation and style of the photographs, and on the other makes you admire the fact that this is so relaxed and fun that it invites the viewer not to take any of it too seriously. A delicate balance, but clearly one that Ueda mastered fully.

Ueda went through several seasons of photographing on the sand, at different times of the year, but always using the monochrome to his advantage and making his subject float in a surreal manner, matched mostly by the surrealist painters a couple of decades earlier.

There are many Japanese photographers in the show at the MEP, and it is worth a visit, but for me, Shoji Ueda calls for a deep dive into what else he has done and may even one day call for a visit to Japan to see his museum. An entire museum dedicated to this superbly gifted photographer. 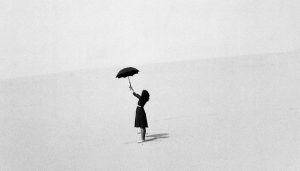 Mémoire et lumière runs through the end of August. Worth a trip, and maybe an escape from the Paris summer heat. Or, if you are in Japan take the time to visit the Shoji Ueda museum in the city of Kishimoto, Tottori Prefecture.

Images are borrowed from the web and are by Shoji Ueda and are for illustration purposes only, no rights owned or implied.