Karl Lagerfeld, the ‘Kaiser’, fancied himself a photographer.  I watched a documentary about his work some years ago and basically, a small army of assistants set up the shot and Karl stepped in, in his black driving gloves, high collar, skinny black tie, sunglasses and white ponytail and pressed the shutter.  Did he have the vision?  Probably.  Did he do the work?  Not really.

I am not sure I consider this the work of a true photographer, but I do have respect for Mr. Lagerfeld’s creative skills in many areas.  The man had a great eye, there is no doubt.  Watching him sketch, or in a decisive manner declare that a skirt should be one centimeter shorter, with 15 minutes to show time, was amazing to watch.  He worked endless hours and without a doubt brought Chanel to new heights and likely had a great influence on how women have dressed over the past three decades.

I have seen a bunch of Lagerfeld’s photographs over the years and bought two for my own own collection about 15 years ago.  I like the graphic feel of these images, while I am sure that he didn’t select the settings on the camera, nor arrange the lighting and so forth, he did design the black and white clothes, which suit Helena Christensen incredibly well.  The look would not be out of place, even 30-odd years later.  They were taken by Karl – at least nominally – and used for his Chanel campaign.  I am not entirely sure what year, but judging by the cut, sometime in the late 1980s? 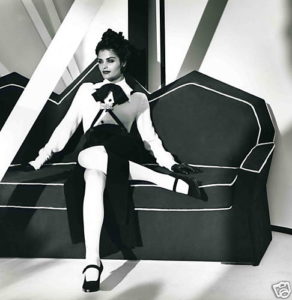 While I don’t think of the Kaiser as a great photographer, I do think of him as having a great line, both on the page and when asked in any number of languages for a comment. Speaking always at high speed, he delivered some wonderful lines over the years. My favorite quote, and an opinion that I share emphatically, particularly as a person who spends way too much time in airports, where perhaps the worst fashion statements are made, he said with his usual machine gun delivery:

“Sweatpants are a sign of defeat. You lost control of your life so you bought some sweatpants.”          – Karl ‘the Kaiser’ Lagerfeld